My name is Natasha Michaelides, a fashion college graduate with many years of experience in dressmaking and fashion design and the owner of a large collection of gorgeous vintage fabrics. 2 years ago I came across a lovely pattern for a yoga bag and decided to start using my fabrics to create interesting and unique design combinations. The yoga bags evolved into weekend bags and I added leather from some old leather jackets that I found in my cupboard.
As I am a great believer in repurposing fabrics I also make my own bias binding from vintage silk ties to use as a beautiful finish for the pockets. 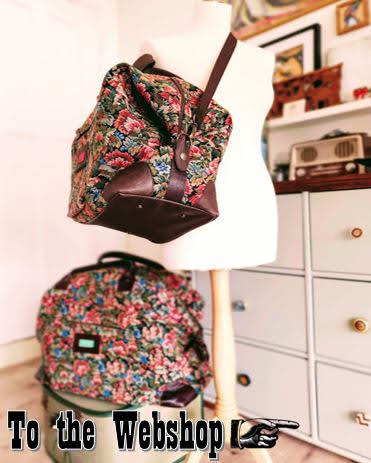 The fabrics I use are mostly upholstery fabrics, curtain fabrics and wall tapestries that tell a story. My inspiration for the weekend bag design comes from the Victorian era, the Wild West, Paris – Moulin Rouge – Burlesque – Belle Epoque, Art Nouveau and the Arts and Crafts Movement. North America and Europe around the 1850’s to early 1900’s: crazy, beautiful, mad, bohemian, eclectic design that I love so much, combined with wacky 1960’s period films like My Fair Lady, Mary Poppins, Funny Girl, What’s New Pussycat, etc.

A short history of carpet bags

A carpet bag is a top-opening traveling bag made of carpet, commonly from an oriental rug. It was a popular form of luggage in the United States and Europe in the 19th century, featuring simple handles and only an upper frame, which served as its closure. Some small modern versions are used as handbags or purses.

The carpet bag was invented as a type of inexpensive personal baggage light enough for a passenger to carry, like a duffel bag, as opposed to a large rigid wooden or metal trunk, which required the assistance of porters.

In 1886, the Scientific American described it as old-fashioned and reliable, “still unsurpassed by any, where rough wear is the principal thing to be studied. Such a bag, if constructed of good Brussels carpeting and unquestionable workmanship, will last a lifetime, provided always that a substantial frame is used.” Its use implied self-sufficiency: in Jules Verne’s 1873 novel Around the World in Eighty Days, Phileas Fogg and Passepartout bring only a carpet bag as luggage, which holds a few items of clothing and a great deal of cash. 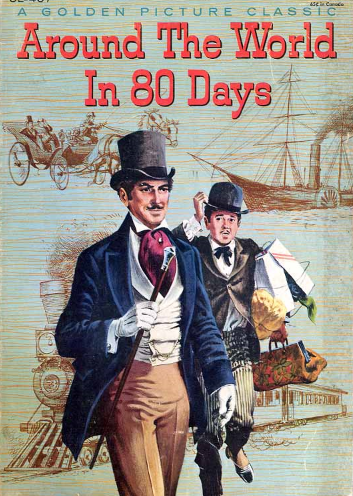 Carpetbaggers in the 19th century

The carpetbaggers of the Reconstruction Era following the American Civil War—North Americans who moved to the South for economic or political opportunity—were given their name from often carrying only this type of luggage, implying they came with little while hoping to acquire lots. (Source: Wikipedia)

Carpet bags used to be made of Oriental rugs or the Brussels carpet referred to above, with “a heavy pile formed by uncut loops of wool on a linen warp”. Carpet was the chosen material because “remainder” pieces were easily bought for its manufacture.

Some carpet bags could also serve as a “railway rug”, a common item in the 19th century for warmth in drafty, unheated rail-cars. The rug could either be opened as a blanket, or latched up on the sides as a traveling bag. From Robert Louis Stevenson’s Travels with a Donkey in the Cévennes (1879): “… my railway-rug, which, being also in the form of a bag, made me a double castle for cold nights.”

Carpetbags during the Hippie generation

Carpetbags made something of a brief resurgence in the 1960s with the emergence of the Hippie generation, salvaged from old family attics and second-hand stores. This gave rise to limited new manufacture as a trendy fashion accessory.

Using the historic carpet bags as inspiration we developed a more modern bag, big enough for a short trip and easy to carry. Ample but small enough to use as airline carry-on baggage / hand luggage. The bags are created with a lot of care and, just like the original carpet bags, are made to last a lifetime. 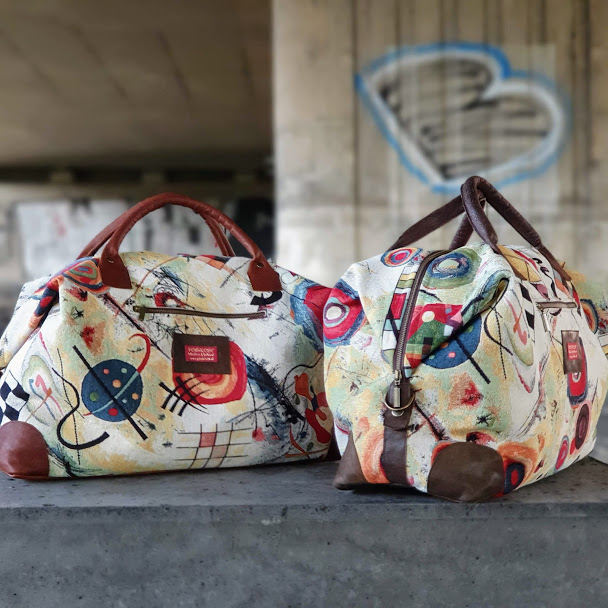